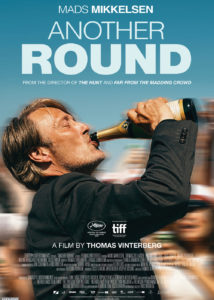 There’s a theory that modest inebriation opens our minds to the world around us, diminishing our problems and increasing our creativity. Heartened by that theory, Martin and three of his friends, all jaded high school teachers, embark on an experiment to maintain a constant level of intoxication throughout the workday. Initial results are positive, and the teachers’ little project turns into a genuine academic study. Both their classes and their results continue to improve, and the group feels alive again!   Some of the participants see further improvement, others go off the rails as it becomes increasingly clear that bold acts carry big consequences.

A cautionary tale on the consequences of alcohol abuse ultimately becomes a life- affirming message as it explores midlife melancholy, fallibility, friendship and the need for joy.  With Mads Mikkelssen at his scintillating best in this mature blend of comedy, tragedy, and human behaviour, Thomas Vinterberg’s  Another Round won the Oscar this year for Best International Feature Film to add to its tally of over 40 other big wins around the world.

Take one part deftly directed tragicomedy, add a dash of Mads Mikkelsen in vintage form, and you’ve got Another Round — an intoxicating look at midlife crises. Rotten Tomatoes

A coming-of-age fable in reverse, defined in equal measures by merriment and melancholy. Adam Nayman, The Ringer

Surprising and complex, with sublime dialogue and fascinating character detail; the cinematography is organic but touched constantly by magic, and the acting is spectacular. CJ Johnson, Film Mafia

An unblinking look at our desire to feel the rush of life, even when the party is over and the lights come on. Claus Ladegaard, CEO, Danish Film Institute