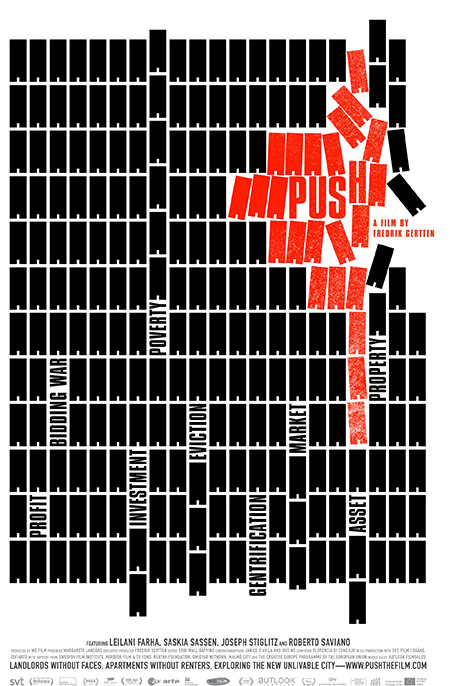 Housing prices are skyrocketing in cities around the world. Incomes are not. PUSH sheds light on a new kind of faceless landlord, our increasingly unlivable cities and an escalating crisis that has an effect on us all. This is not gentrification, it’s a different kind of monster. The film follows Leilani Farha, the UN Special Rapporteur on Adequate Housing, as she travels the globe, trying to understand who’s being pushed out of the city and why. ‘I believe there’s a huge difference between housing as a commodity and gold as a commodity. Gold is not a human right, housing is.’ – Leilani Farha.

It is time to PUSH back!

Awards: Winner of the Politiken Audience Award at the CPH:DOX festival.

‘A gripping new film about how global finance is fuelling the housing crisis and making cities unaffordable to live in.’ Patrick Butler, The Guardian.

‘Fredrik Gertten’s lively, approachable documentary on the global housing crisis should leave audiences feeling engaged, enraged and with plenty to discuss afterwards….potentially depressing material is handled with a light touch and a welcome edge of humour.’ Allan Hunter, Screen Daily.

‘It plays like a real-world conspiracy thriller, with an inspiring hero at its heart.’ Demetrios Matheou, Little White Lies.