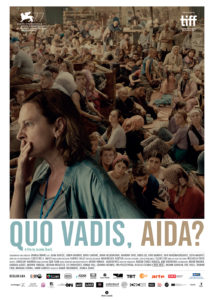 Bosnia, 11 July 1995. Aida is a translator for the UN when the Serbian army takes over the small town of Srebrenica.  Can she possibly do anything to help the inhabitants?  Get her own family into safety? Rescue at least one of her sons?

With all the ticking tension of a time-bomb thriller, we are pulled into the personal urgency of a mass atrocity.  The film does not focus on the violence that hovers off-screen as a background context, it is instead a deep dive into heat-of-the-moment decision-making, alongside the confusion, mixed messages and incompetency of leadership in what has been called Europe’s only post-World War II genocide.

With the sensational Jasna Djuricic in the lead role, director Jasmila Žbanić has captured the harrowing events of the Srebrenica massacre with compelling immediacy, earning the film an Oscar nomination for Best International Feature and winning the Independent Spirit Award amongst numerous others.

A devastating, urgent and brilliant film about the Srebrenica genocide, immersing us deeply in a world of bureaucratic chaos where the human cost of a complete administrative failure is made explicit.  Alexandra Heller-Nicholas, AWFJ Women on Film

Quo Vadis, Aida? asks its viewers not only to uncover their eyes, but also to speak up against wrongdoing. Far from being an appeal for peace and reconciliation, the film is a call for an ethics and politics of responsibility. Aida A. Hozić, University of Florida/ Srdjan Vučetić, University of Ottawa.