Home/Press Releases/European Film Festival 2017 in South Africa: Treat yourself to the best of European Cinema
Previous Next

Treat yourself to the best of European Cinema

The European Film Festival is back for the 4th time at Cinema Nouveau theatres in Johannesburg, Cape Town, Pretoria and Durban from 5 to 14 May.

The lineup of films represents 12 countries, including Ireland and Croatia for the first time. Each film reflects the skills and take on the world of filmmakers who are not limited by national borders. American Honey, an award-winning British-made road movie set in America’s mid-west, is as much a magical mystery tour into Americana as it is a coming-of-age drama. King of the Belgians is a comedic piece coming out of Belgium, which sees the Belgian king and his entourage crossing the Balkans in a madcap adventure, after learning of a coup back home. Acknowledged by the Rotterdam International Film Festival, this movie is a road trip with a difference, at once thoughtful, hilarious and wild.

Strike a Pose is a Dutch documentary exploration of “Madonna’s men”, the male dancers who served to consolidate the pop icon’s message and status as an outspoken advocate for LGBT-rights. This winner of a jury award at the Key West Film Festival is an unrelenting documentary which exposes new aspects of a well-known story. Germany’s Toni Erdmann is the outlandish tale of how the passing of a family dog sets off a series of events with a major impact on a father-daughter relationship. Touted as an academy award winner for best foreign film in 2017, this is a must see, by all accounts.

Festival Director Katarina Hedrén who returns as the curator for the second time is delighted with the pickings: “With this year’s selection which includes films of different genres, textures and moods, the aim is to entertain, amuse and offer opportunities for reflection, new discoveries and recognition,” she says. “The theme binding the films together is cinematic excellence through acclaimed and award-winning films from 12 European countries.”

The 2017 selection is a mixed pot in terms of film themes which span from animal rights to family dynamics. Dramas and documentaries, comedies, tales of grief and a children’s adventure sit side by side on this eclectic and exciting programme.

“The films are new, but the commitment remains the same: to offer audiences in South Africa an opportunity to experience acclaimed and award-winning European cinema”, adds Hedrén.

Motheo Matsau, Chief of Marketing and Sales at Ster-Kinekor Theatres, adds: “Our Nouveau cinemas are synonymous with the screening of the very best in art-house and foreign language films from across the globe, and the European Film Festival content certainly delivers on that promise.”

“European filmmaking has seen another year of highly creative output, and filmmakers continue to produce works that challenge and uproot. We are happy that Festival Director Katarina Hedrén’s 2017 film selection has given even more variety to the European Film Festival.”, says Norbert Spitz, Director of the Goethe-Institut, on behalf of the European partners.

High res stills and posters are available for download on https://www.dropbox.com/sh/d4at678881htghg/AAAPSdnzRhxdPCwS44_OlGdXa?dl=0

The European Film Festival 2017 line up is: 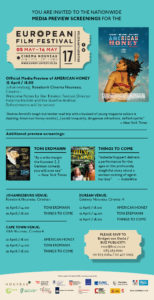 Media previews for the EUFF will be hosted as follows:

Welcome Notes by Ster Kinekor, Festival Director Katarina Hedrén and the Goethe-Institut. Refreshments will be served.

PLEASE RSVP FOR PREVIEW SCREENINGS TO:

KING OF THE BELGIANS

On a state visit to Turkey, the dutiful but uninspired King Nicolas the 3rd of Belgium learns of a coup back home (the Walloons have declared themselves fed up and independent). Prevented to go back by air, but filled with a renewed sense of purpose, the king embarks on an unorthodox road trip through the Balkans, accompanied by his reluctant aides and led by a resourceful British documentary filmmaker, initially commissioned to improve the dull monarch’s image.

This thoughtful and hilarious drama was awarded by the Circle of Dutch Film Journalists at Rotterdam International Film Festival and has screened at Venice and Hamburg Film Festivals.

In Ade’s outlandish and outstanding third feature, eccentric music teacher, father and practical-joker Winfried Conradi joins his corporate-ladder climbing daughter Ines in Bucharest following his dog’s passing. In an effort to rekindle family bonds, he infiltrates the multinational firm she works for, disguised as the life coach Toni Erdmann.

Toni Erdmann was Germany’s submission for the 2017 Oscars for Best Foreign Language Film, and until the very end, a highly touted winner. Among its numerous and prestigious nominations and awards are nominations for the Golden Globes and the BAFTAs (2017), the FIPRESCI prize at Cannes 2016, the German Film Critics Association Awards for Best Film, Best Screenplay and Best Edit and several International Cinephile Society Awards.

THE QUEEN OF IRELAND

Horgan’s heartfelt documentary tells about the life and activism of Irish drag queen Pandora Panti Bliss. Born in Ireland in the late 1960s and instrumental in revolutionizing the Irish LGBT-scene, the charismatic, sharp and outspoken performer Rory O’Neill almost seems destined to play an influential role at the time of the 2015 Irish referendum for marriage equality rights. The film traces Panti’s spectacular career, public controversies as well as more personal aspects of Rory O’Neill’s life.

The Queen of Ireland has screened at film festival across the world and won awards for Best Film and Best Documentary presented by Dublin Film Critics Circle.

The course of celebrated Italian author and journalist Massimo Gramellini’s entire life changes on the day his mother dies. Sheltered by his well-meaning but distant father, the 9-year old is left to deal with the void as best as he can. Partly in denial and partly kept in the dark, Massimo grows up in a rapidly changing Italy. Though his professional star is fast rising, he remains stuck emotionally until the day he is asked to reply to the letter of a newspaper reader in distress.

Based on Gramellini’s autobiography, this cinematic gem opened the Directors Fortnight at Cannes 2016 and won the International Cinephile Society’s Award for best film not released in 2017.

When seven young men became Madonna’s backup dancers for her legendary Blond Ambition world tour in 1990, their lives changed. The mythical documentary Truth or Dare – shot as they traveled the world – contributed to cement Madonna’s status as an icon and one of that time’s most prominent voices for gay rights and AIDS-prevention. The cost for the superstar’s outspokenness and daring image was paid by those who returned to normal life once the dream was over. Dutch documentarians, Gould and Zwaan, give voice to these men.

This scenic and original mother-and-daughter directed thriller tells of part-time school teacher, retired civil engineer and passionate animal-lover, Janina Duszejko, who lives alone in a village where hunting is the preferred pastime of the small community’s big men. When one by one, these prominent pillars of society are found dead, without any trace of a perpetrator, the question on everybody’s mind is, ‘Who or what did it?’

With a career, spanning over continents, three-times Oscar-nominated director Agnieszka Holland returns with a fresh film, based on a novel, which she calls ‘a fairytale about anger’ and which competed for the Golden Bear at Berlin International Film Festival (2017).

Five close friends gather after the passing of their common friend Martha, at a tourist resort that the deceased was about to open. The group spends the entire night after Martha’s wake reminiscing, eating, drinking, smoking, opening up old wounds, and revealing secrets, in addition to alternately forgiving and judging one another. When the morning comes, the question of the women’s future friendship remains open.

ZIP & ZAP AND THE CAPTAIN’S ISLAND

Among its achievements are the Jury Prize at Cannes (2016), the FIPRESCI Prize at Stockholm Film Festival (2016) as well as awards for Best Independent Film, Best Director, Best Actress and Outstanding Achievement in Craft for cinematography at the British Independent Film Awards (2016). It was nominated for a BAFTA for Outstanding British Film of the Year.