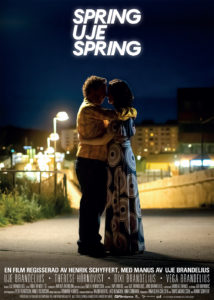 Run Uje Run is an biographical music comedy about the way life takes turns you could never have imagined.  As well as writing the screenplay Swedish musician and actor Uje Brandelius plays himself in Henrik Schyffert’s directorial debut. As a pop band frontman, Uje dreams about making another hit, but his life brings him surprises instead: such as a serious disease.  Uje has to re-value his priorities very quickly.  A film about appreciating what you have.

Both the star and the director are icons in Swedish pop culture; Brandelius was in the band Doctor Kosmos, Schyffert in Whale, amongst their other accomplishments on stage and tv, and as stand-up comedians.  This darkly witty indie drama won Best Film at the annual Swedish Film Awards (Guldbagge), where it also took Best Actor and Best Screenplay awards. At Sweden’s premier film event the Goteborg Film Festival it won the Audience Award for Best Nordic Film amongst other accolades.

Nothing short of amazing, this movie manages to be many things at once. It’s stylistically seminal. It’s touching, sad and existential. It’s funny, ironic and silly. Mailstudio Star, IMDB

Run Uje Run teaches us to appreciate the small joys of everyday life and take advantage of the moments. Bio Kaskad

A joyful and gripping energy pill, and a celebration to friendship and family. Wibjorn, IMDB