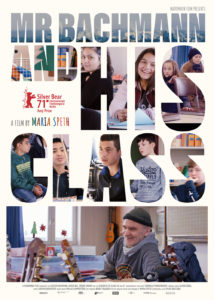 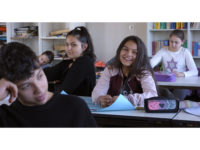 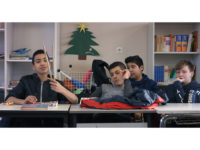 MR. BACHMANN AND HIS CLASS

Where does one feel at home? In Stadtallendorf, a German city with a history of both excluding and integrating foreigners, genial teacher Dieter Bachmann offers his pupils the key to at least feeling as if they are at home. Aged between twelve and fourteen, these pupils come from twelve different nations; some have not quite mastered the German language. Using unconventional methods to confront the complex social and cultural realities, Bachmann is eager to inspire these citizens-in-the-making with a sense of curiosity for a wide range of crafts, subjects, cultures and opinions, and their own place in the world.

Watching this absorbing, sensitive documentary, one is overwhelmed with the realisation that, if only all children were blessed with such emotionally intelligent, ever-patient educators, conflict would be mitigated via discussion and John Lennon’s “Imagine” could be our reality.  Filmmaker Maria Speth and her cinematographer Reinhold Vorschneider beautifully highlight not only the importance of education but also what a quietly spectacular process it can be.  Mr Bachmann and His Class won both the Silver Bear Jury Prize and the Audience Award at this year’s Berlinale Film Festival.

Mr Bachmann and His Class is extraordinarily life-affirming and has high hopes for a globalised, integrated next generation. The world should take note of one teacher’s work. Carmen Paddock, One Room With A View

It’s impossible to imagine that a documentary would be able to hold you in thrall for its 3 hours 37 minutes long duration. But Maria Speth’s brilliant film manages to accomplish exactly that. Namrata Joshi, National Herald India

it’s hard not to feel we’re seeing the first rays of a better world about to dawn. Christian Blauvelt, indieWire