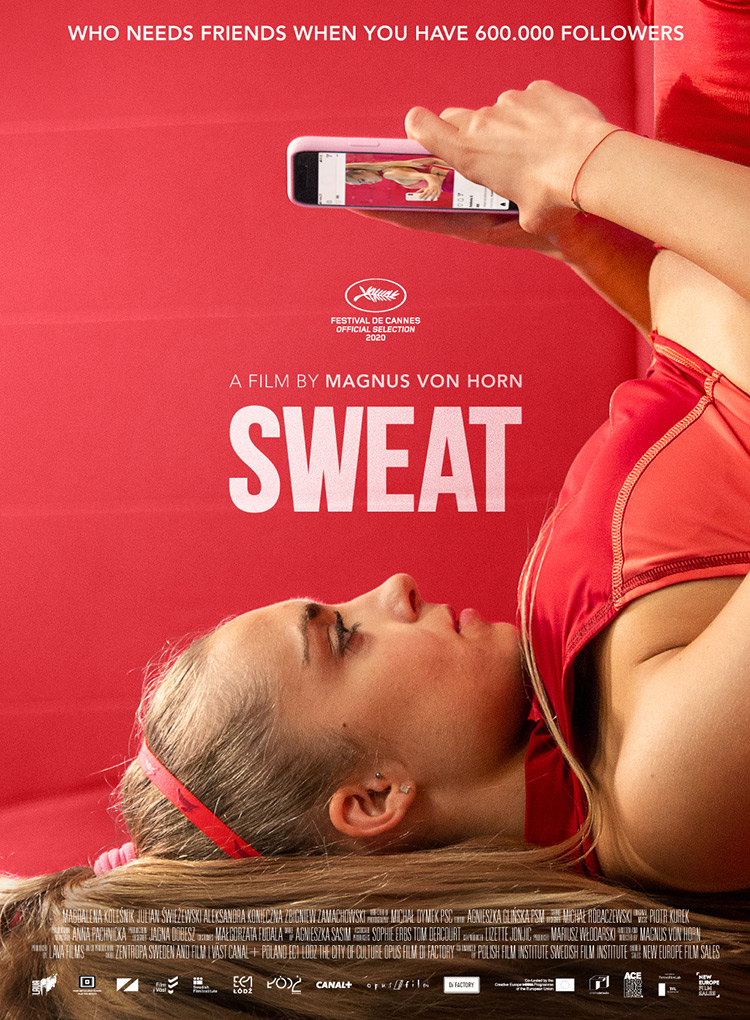 SWEAT recounts three days in the life of fitness motivator Sylwia Zając, whose presence on social media has made her a celebrity. Although she has hundreds of thousands of followers, is surrounded by loyal employees and admired by acquaintances, she is looking for true intimacy.  Sylwia’s own self-centeredness alienates her from meaningful relationship, and  beneath the slick workouts, the azure-blue gaze and big smile we discover a fragility that will be tested….

In this day and age when social media has occupied such a dominant part of our modernised lives, SWEAT hits the pause button and makes us reflect on who is influencing who. At what point do we lose control over the mechanism and become subject to the tool?  With a scintillating debut by Magdalena Kolesnik, Swedish director Magnus von Horn’s second feature film SWEAT delivers a prescient look at social media impacts on individuals and society.   SWEAT was part of the prestigious Official Cannes Selection of 2020, and is set to keep us thinking way into our digital future.

‘An intense look at a social media-obsessed loner wrestling with the nature of her popularity’
Eric Kohn, Indiewire

‘Always keen on firing up her iPhone and providing an update for her fans, addicted to living in public, Sylwia craves the anonymity of the attention she receives, but struggles to confront its real-world implications’
Yahoo Entertainment

‘A rivetingly sober, incisive investigation of loneliness and intimacy in the Instagram era, a psychological profile of an influencer’
Zhuo-Ning Su, Awards Daily

‘One of the more textured and rewarding films to deal with the phenomenon of modern celebrity”
Wendy Ide, Screen Daily